To go to the pool, twenty pupils chose the fietsbus

It is eight in the morning at the Primary School Saint-Joseph Boondael in Ixelles. Little by little the children arrive, dropped off by their parents in the car, on foot or by bike. Those coming on two wheels put their bikes in the bike parking on the corner at the entrance. The others busy themselves around their bike, remove the padlocks, look for their helmet and fluorescent jackets a little further. They are about the leave.

Once a week, the pupils of the fifth and sixth years have their swimming lesson at the Ixelles pool. Until now, to cover the three kilometres, the pupils took a bus booked especially for the occasion. But in March, at the initiative of Christophe, one of the teachers, a fietsbus was started. Those who wanted to could do the return trip by bike supervised by the teachers, the PE teacher and a community guard from the municipality of Ixelles. Sometimes, a few parents will also accompany the group. “The first time, there were about twenty-seven pupils because it was new. Since then the group has stayed the same and there are twenty pupils out of sixty-four,” explains Nathalie, the Sports teacher.

On the pupils has his own explanation for the non-participation of the others in his class, “either they are too lazy or they don’t have a bike.”

The children get ready, they line up. “We ride in a staggers formation,” Christian, the teacher repeats. “Not side by side. And leave sufficient distance between you,” At the head of the group, Rose confesses that she participated the first two times and then stopped because she wanted to be with her friends on the bus and then, “at first it was difficult on the return journey.” It is true that going, the route is downhill and on the return journey your muscles need to work a bit harder. “But now it’s ok, I have got used to it,” Rose smiles.

Behind, Hugo, Louis and Félix are chatting and comparing their bikes. For Hugo, the bike, “it is the best because it doesn’t pollute.” And also “It is faster than the bus,” Louis explains. The pupils going by bike actually arrive ten to twenty minutes before the bus because there are lots of traffic jams. “On 30 minutes in the water, that is a lot,” Nathalie says.

For Félix, the advantage of the bike, is that he can “shout”. Or in any case “speak loudly”. Which he can’t do on the bus. Finally, for Hugo, “it is more daring to go by bike.” “We were also once given cake to congratulate us,” Louis recalls.

Enough chatting, it’s time to go. With their fluorescent jackets the pupils look somewhat like ducklings in a line: the procession does not go unnoticed on the streets of Ixelles. Arrives at the Boulevard Général Jacques, the peloton passes a group of adults on their bikes who greet the children with bells. “They are parents,” smiles Nathalie. After Ixelles hospital, the children pass a line of cars in a traffic jam on the left. “We pass then and we say “hi”,” smiles one of the girls proudly.

At each crossroads, the escorts keep watch and repeat the safety instructions.

After 15 minutes through the small roads, the group arrives at the bicycle parking not far from the pool. On the return, as it is a little uphill, the trip takes more like 20 minutes.

Eventually, the idea is to do without the bus. To allocate that budget to other projects. “And to motivate pupils to cycle and be less polluting,” says Christian. This project is part of the school’s philosophy and in its school mobility plan. “We have a kiss & ride space to drop off the children. We make bike parking available and we have received some walking bikes to get the smallest used to the saddle,” explains Christian. Furthermore, all pupils in the fifth year of primary school pass a cycling certificate organised by Pro Vélo. The day after our visit, the pupils will go to collect the precious certificate from the municipality of Ixelles. By bike, of course!

Christian, himself, enjoys escorting the children on the bike. “There is an easy contact with the children. More than on foot. There is always a great discussion,” he says. Mourad, the community guard from the municipality of Ixelles, trained by Pro Vélo is also very content to be able to ride a bike. “Before this project, we were a little on standby. I just did the home to work commute by bike. It is fun to escort the children. They also cycle really well. The journeys run smoothly,” he observes. 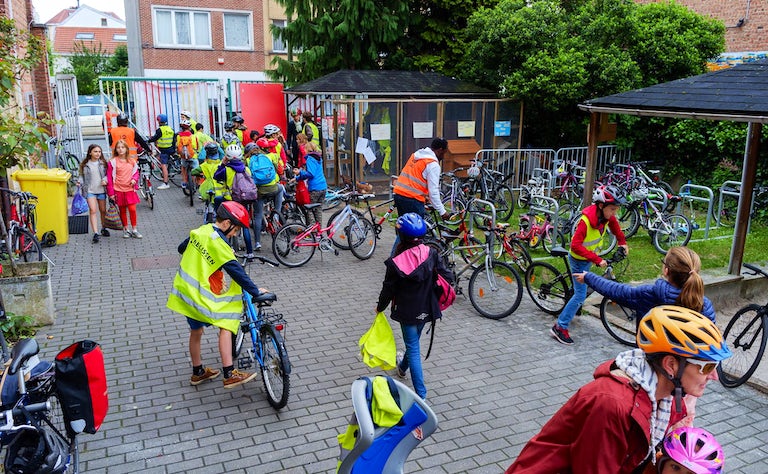 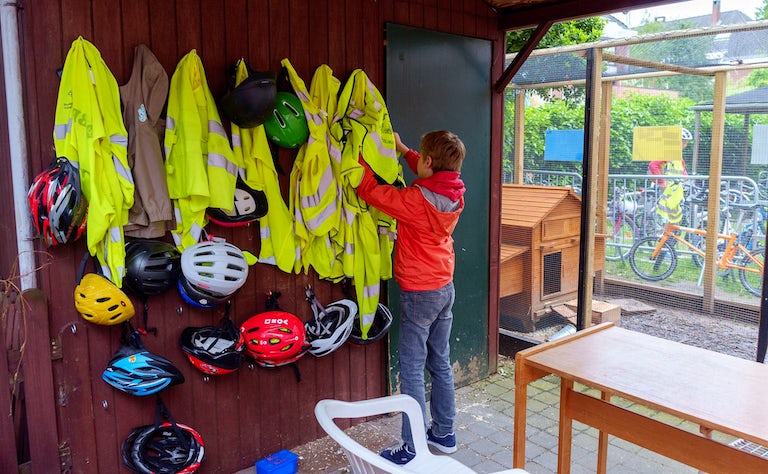 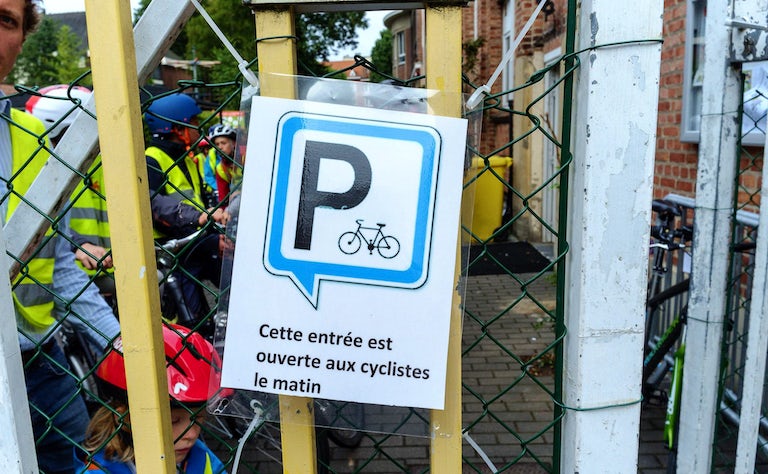 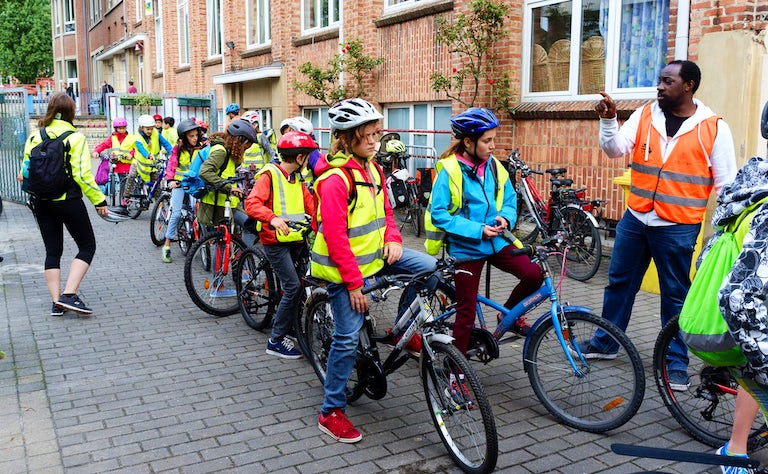 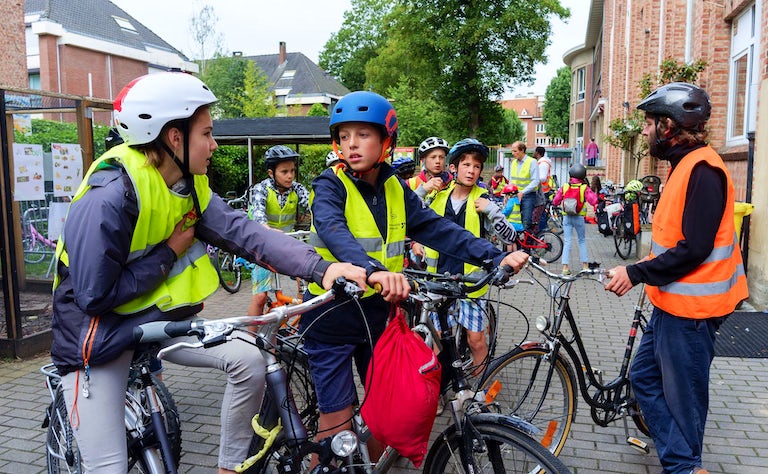 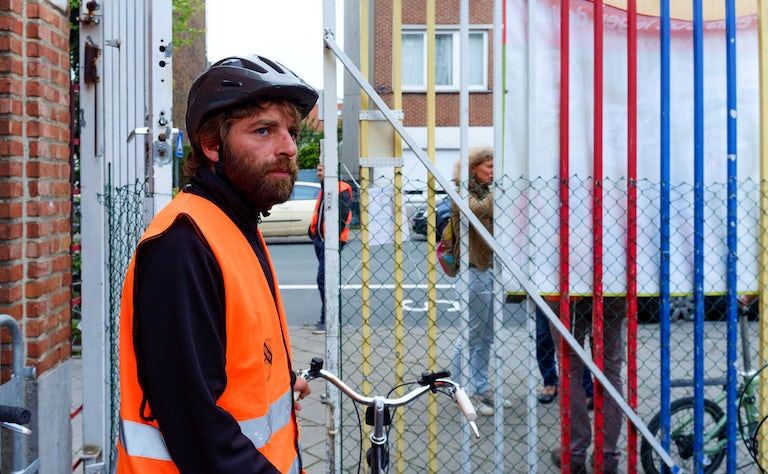 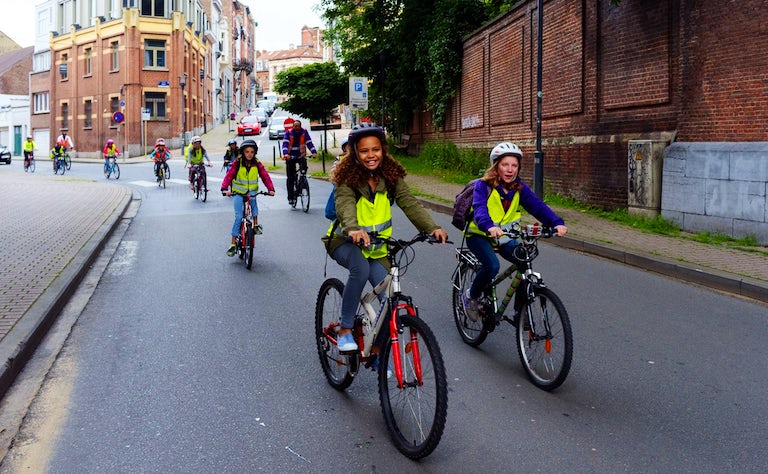 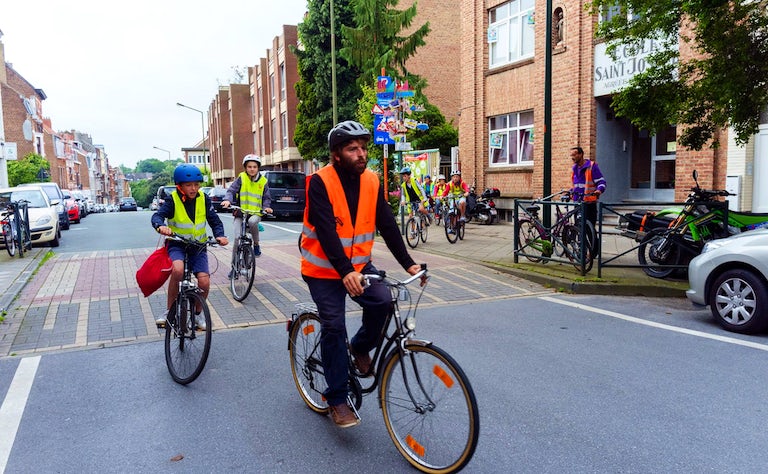 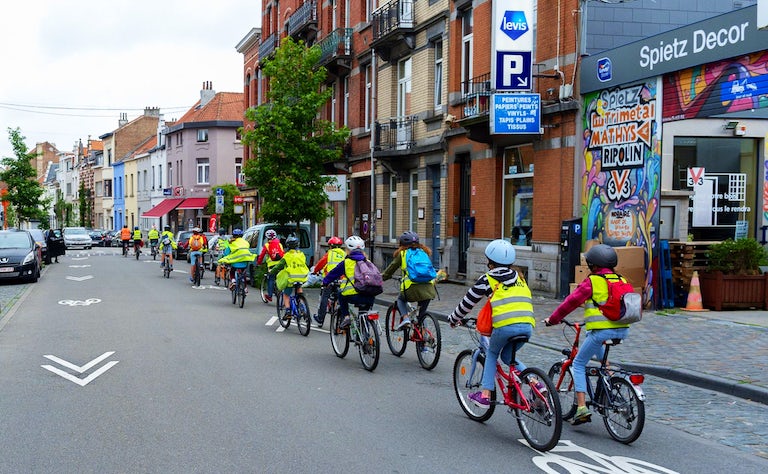 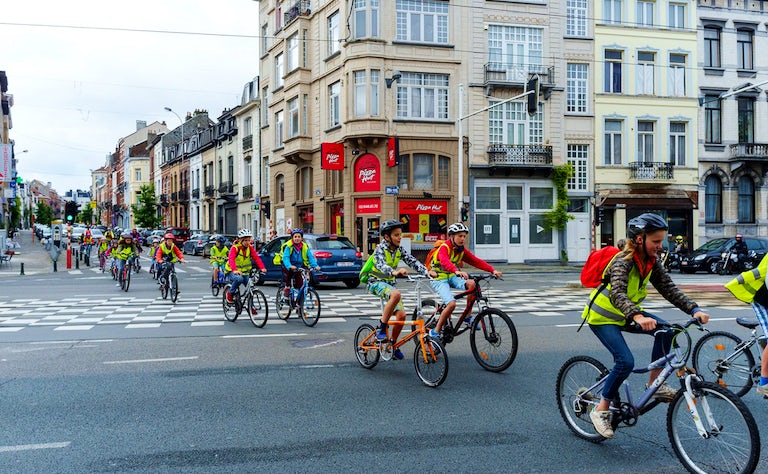 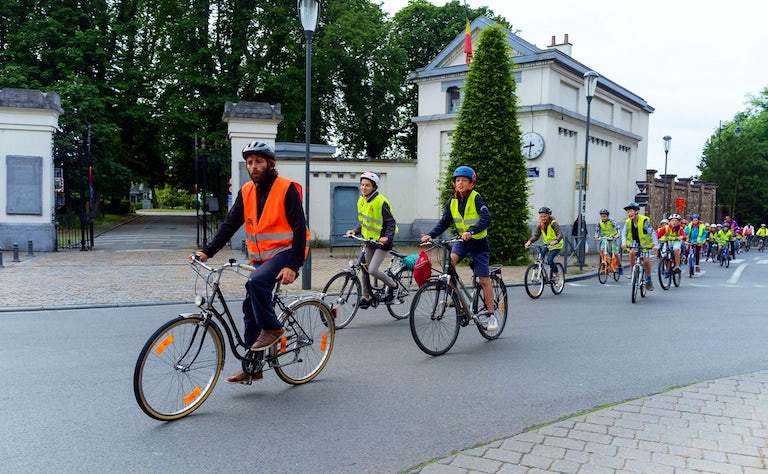